Biodiversity and Sustainable Tourism
22
May 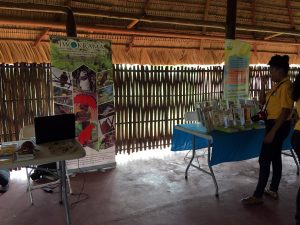 The United Nations Convention on Biological Diversity [CBD] was signed by 150 countries, including Guyana, at the Rio Summit in Rio de Janeiro, Brazil in December 1992. Guyana later ratifies the Convention on August 29, 1994. There are now 190 parties to the convention who are committed towards achieving the objectives of the convention which is operated through seven thematic programmes of work:-

The Environmental Protection Agency [EPA] is the National focal point for the United Nations Convention. Iwokrama joined the EPA in celebration of International Biodiversity Day to provide Education and Awareness on the importance of Guyana’s Biodiversity. On Friday May 19, 2017 EPA held a Youth Forum with seventeen Secondary Schools Environmental Clubs at the Amerindian Village, Sophia Exhibition Site. Students were asked to compete through skits, songs or dancing on their interpretation of this year’s theme. An elocution contest was also part of the programme where each student spoke for five minutes on the topic. At the end of the exercise winners were awarded with trophies and prizes. Iwokrama had a booth and engaged students in discussions based on tourism and protected areas while distribution tourism materials.

The Iwokrama rainforest of almost one million acres of tropical forest is known as the: Green Heart of Guyana and is home to 471 bird species, 134 types of fish, 81 different reptiles, 56 species of amphibians and 142 different mammals, South America’s largest cat – the jaguar; the world’s largest scaled fresh water fish – the Arapaima, the world’s largest otters, river turtles, ant eaters, snakes, eagles and caimans and more than 1250 recorded plant species. 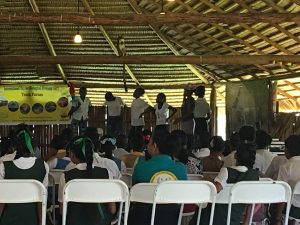 Iwokrama supports biodiversity research locally and internationally is recognised for its outstanding achievement by H.E President David Granger who has pledged resources to ensure Iwokrama fulfils its mission. Plans are currently in progress for the construction of a Biodiversity Research Centre in the Iwokrama Forest. The centre will be a full-service facility that will include laboratories, classrooms, a conference facility and accommodation on top of our existing services facilities. The new Biodiversity centre will enhance visits of researchers, students and scientists from both Guyana and the rest of the world to study our unique Forest ecosystem.

Biodiversity, at the level of species and ecosystems, provides an important foundation for many aspects of tourism, one of Iwokrama’s oldest businesses. Its attractive landscapes, rich biodiversity, forest conservation and wildlife and biriding sanctuaries are all attributes to this adventure paradise for nature lovers, birders, plant enthusiasts, and researchers who contribute directly to the centre’s sustainability of a well-managed tourist attraction and reducing threats to key wildlife populations and biodiversity values through revenue.